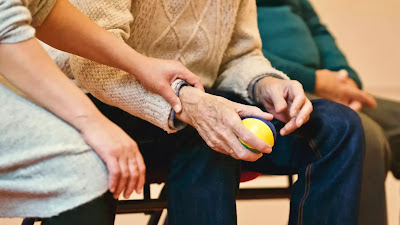 One day there was a group of people who were traveling for the train from other cities. they saw the oldest woman beside him she was crying and very depressed. when the train reached their destination the lady fell down on the platform that group was helped him and give him some water to take a rest for a minute. when she fell down she was unconscious after a few minutes she wakeup and talking to their group member. One guy of his group was asking where she was going and what happen to her so the lady told her everything about him.


Advertisement
The group members were helped the oldest women she was very hungry so that guy would provide them with food to eat. she was very happy and comfortable to talk with the group member. she gave the blessing to each group member to get go ahead and achieve their gold in their life.


Women were trying to walk but her leg Sprained due to fell down on the platform. One of their group members decided firstly they were dropped their home afterward they would go. they did not leave him like this. the guys were asking her address. she told the area but she didn’t remember the exact address. That group member took her lady to their place and finding out her room no. when she reached her location a few people where recognized her so they came to the oldest lady and talking to him.


The group member where decided when the family member reached afterward they were going. after a few hours, her family were coming to their house and saw his oldest woman and to apologize to him and they promised her to never let them go alone.

Please continue to support Everything Should Be Reality. Please do share this blog and its posts too.

Covid-19 Pandemic Is An Opportunity For Skill Development